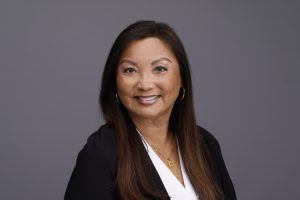 Lily Chang was elected Secretary-Treasurer of the Canadian Labour Congress (CLC) at the 29th Constitutional Convention in 2021. She is the first worker of East Asian descent elected to office at CLC.

As CLC’s Secretary-Treasurer, Lily oversees the organization’s finances. She has also been tasked with guiding the work of the Human Rights Department (including Indigenous and Disability Rights working groups), and representing CLC at the International Labour Organization.

After obtaining a Psychology degree from the University of Toronto, Lily started her career as a social services caseworker. She saw first-hand how inequality and racism were linked to poverty. The disparities she saw and the cuts to education affecting her children fueled her interest in labour work.

Lily spent over three decades advocating for members at CUPE Local 79 and thirteen years as the local’s Treasurer. While in that role, she led the acquisition of a building in downtown Toronto, solidifying the fiscal foundation of the organization. She also served as Executive Board member of the Toronto and York Region Labour Council, chairing the Municipal Committee.

Lily is the proud mother of a daughter, also active in the labour movement as a researcher, and a son, who works designing clean energy solutions.