A personal revelation led to a commitment to giving back

Sumant didn’t always feel invested in giving back, but the tenth anniversary of 9/11 shifted his thinking. 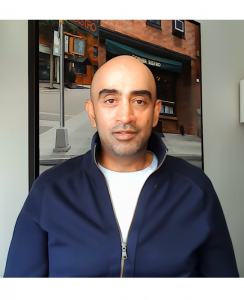 I started my career in New York. I’d gone to grad school in the States—my degree was in public policy and international affairs—and after I graduated, I got a job working for the city government there. My building was a block away from the Twin Towers. I was there on 9/11.

When something like that happens, that brush with mortality, bearing witness to a tragedy, it does change things. I wanted to be close to my family, so I took a job that brought me back home, even though it wasn’t in public service. I also found myself on a path where I wasn’t that focused on giving. Eventually, I started working at a bank with an organized giving program. A lot of people make their contribution decisions after they’ve received their year-end bonuses. Well, the second year I was there, it wasn’t a great year and my bonus was smaller than the year before, so I ended up making a smaller donation. Oddly, in the weeks that followed, I didn’t feel great about that—I was raised in a family where helping neighbours, friends or new immigrants was an ongoing and not at all unusual thing, and reducing my giving wasn’t in line with that—but the feeling eventually passed.

The next year was the ten-year anniversary of 9/11, and I think I finally realized how lucky I was to have survived and been granted a second lease on life. When I looked back on the previous years and the path that I’d been following, I realized that I wanted to do something more with my time and the good luck and good fortune I have. There’s more to life than just working to make money, so I decided from that point forward that I was always going to make my giving decision before I got my compensation numbers.

After that, I started to pay closer attention to who and where and how I was giving money. Over the years, I’ve gone on tours of different agencies and gotten more exposure to the different things that United Way does. I came away with a sense of awe for the people who work at these organizations who are doing everything they possibly can to make other people’s lives better. It made me more committed to supporting United Way.

I guess it shouldn’t be surprising, but I didn’t expect giving to become something that I was doing because I wanted to. I actually feel the joy of giving. It’s a satisfaction that I don’t get in many other places. It’s funny. Giving is almost one of those selfish things you can do because it makes you feel great.

It’s a privilege to do this

My husband Shawnn and I feel our community involvement is a privilege. We get to do this, while so many people can’t. When we took over a hotel and campground in a small community, one of the first things we did was reach out to the local United Way. W …

The Community Services Recovery Fund is a $400 million investment from the Government of Canada to support charities and non-profits as they focus on how to adapt their organizations for pandemic recovery.  Now more than ever, charities a …

READ MORE
A journey to wellness

When I found United Way, I was suffering from depression and anxiety. Every night, I was going to bed praying that I would not wake up the next day. But even when my depression was at its worst, I knew there must be a different life. I am originally fr …