Premji turned to a United Way agency when his wife Shanta was diagnosed with Alzheimer’s. What he didn’t expect was to also find community for himself. 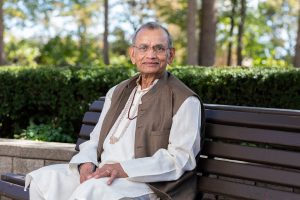 My wife, Shanta, has Alzheimer’s. Before I found United Way, it was very difficult. She’s the patient, but I was the sufferer—she didn’t know what was wrong, but I did, and I was in misery.

We moved to Canada in 2003 to join our children. We lived in a beautiful seniors’ home; my daughter was close by and my son was in walking distance. I would say the two-and-a-half years we spent there were some of the best times in our lives.

But I noticed Shanta’s behaviour had become erratic. Years before, the doctor said she had some anxiety and depression, but this was different. One day, she told me, ‘The police came and dropped me home.’ She had been walking along the highway. This happened three or four more times—the police would find her and bring her home.

I was dealing with my own health challenges during this time, and I didn’t understand what was happening to Shanta. I was exhausted from all the doctor’s appointments to figure out what was wrong. But then the doctor told us it was Alzheimer’s. We saw neurologists and psychologists and they told me, ‘You have to get ready.’ They meant that I was now a caregiver and I had to be prepared for what was coming. They strongly recommended that we find some support.

I gathered my strength and started looking for an adult day services program. Thanks to United Way, I found one to help treat Shanta. She started going two days a week, but soon she went six days a week. What I didn’t expect was that it would also help me. I became a member of the senior wellness group at the United Way agency that ran her program. I got good contacts, and I went to classes. And when I felt overwhelmed, they helped me.

The agency helped me understand how to help her, and how to be a caregiver. They even gave me a ‘Hero at Home’ certificate. That was my recognition, and I was very happy. Eventually, though, it became too much for me to handle. We had to find a nursing home for her. That was hard, too, because we have been married for 55 years and now, we were to be separated.

But the agency helped us find a nursing home and even housing for me. I told them I just wanted to be close to her. Within a week, they found me an apartment in the same area. In fact, it was just adjacent to the nursing home. Really, they were doing so much for me.

But then, Corona. My wife was scared. I was scared. My son decided Shanta would stay with him during the pandemic. As for me, I am still meeting with the senior wellness group. But now we are online. We connect on a daily basis, and on Wednesdays, we meet on Zoom.

Before, I was looking for ways to help my wife. But it is God’s design that I landed with these people, too, because I also found connection and culture. The impact on my life has been very significant. Thanks to United Way, Shanta and I have had five good years—and we are looking forward to more.

There is a special onus on those of us who are most fortunate to help others. The more we give, the more we will make a difference. I get involved, I give, and I stand strong with my fellow human beings. The key value in my life is respect for people. …

With 2022 well underway, I have been reflecting on the year ahead and how grateful I am to have had the opportunity to slow down a bit over the holidays and recharge. With the rapid emergence of Omicron and the 5th wave of this Pandemic, our front-line … 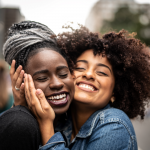 United Ways and Centraides across Canada have also been celebrating Black excellence in their communities this Black History Month. Here are a few of those stories: Advocating for Change – United Way Halifax The community of East Preston is a tight-kni …